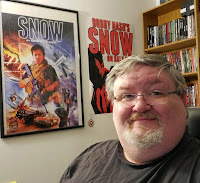 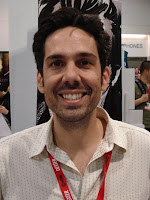 Dennis Calero is an award-winning writer and artist who helped developed "Xmen Noir" for Marvel Comics, as well as having worked on DC and Dark Horse Comics. Calero has also worked on entertainment projects for CBS Films and Weed Road Pictures and famed horror writer Stephen King. He also adapted "The Martian Chronicles" by Ray Bradbury as a graphic novel for Hill & Wang.

His first novel is currently being developed into a film by Lisa Bruce, producer of the Academy Award nominated and Bafta award winning film "Theory of Everything." He co-wrote a pilot for Universal Cable Productions and the SyFy channel and is currently writing two projects for Dark Horse Comics that he will illustrate.

He was nominated for the Harvey, an industry award recognizing excellence in comics, and has been recognized by the Society of Illustrators. 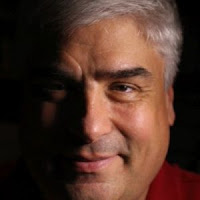 Stuart first began exercising his fascination with vocal performance at a very young age, steeped in performances of the golden age of Mel Blanc, June Foray and dozens of other virtuosos of the radio, early television, film, and cartoon worlds. The result was much parental head-shaking, with an ever-increasing number of odd sounds emanating from those young vocal cords. What's followed has been a life of performance on stage, radio, industrial film, and various digital media including dozens of audiobooks.

If you like listening to a good story (or even just the occasional ripping good yarn), Stuart would love to tell you one.

Learn more about Stuart Gauffi at That Famous Guy 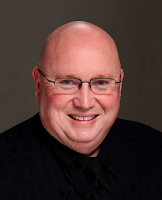 JEFFREY RAY HAYES is a freelance illustrator and graphic designer living in the Austin area of Central Texas. He began his career doing pen and ink art and magazine layout work for Austin-based table-top gaming companies. Jeff also spent time working as a commercial artist and display designer for a Texas-based grocery company in the 1980s until he made a career change. He has served for 30 years as a police officer until his retirement in 2019 as an assistant police chief. During that time, he never stopped working as a freelance artist and formed Plasmafire Graphics, LLC.

Jeff has worked on a number of television / web-based productions and independent films in the United States and United Kingdom as a graphic artist, creating promotional materials and key art for entertainment industry marketing. His work has also extended to book cover illustration, where he has completed over 200 pieces that have graced the covers of books and magazines.

Being only self-taught in illustration and graphic design, he is currently attending the Gemini School of Visual Arts to attain that long-overdue Visual Arts and Communications Degree. The degree will consume much of his time from 2020-2024, but he looks forward to taking on freelance work again when the course of training is done.

“I have had the pleasure to work with many talented authors, directors, actors and radio, television and film producers. I value my working relationships and the many collaborative opportunities I have experienced working with such talented people. I enjoy trying to interpret the characters, locations, plots and ideas that producers, directors and writers have etched in their mind’s eye. I love the collaborative process and watching their faces light up when I have successfully captured that image in an illustration. I find just as much enjoyment when fans of a particular book, television or film get excited about seeing their heroes, or villains in some cases, come to life visually.” – Jeff Hayes 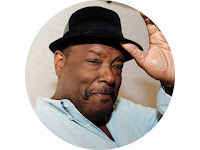 Gary Phillips has written novels, novellas, over sixty-five short stories, comics and conceived what became the well-received Black Pulp I and II for Pro Se Productions. He’s also written new pulp adventures for Moonstone Books, including the linked anthology Day of the Destroyers and Airship 27. The South Florida Sun-Sentinel said of his latest novel in a review, “With its echoes of the Doc Savage series and the Indiana Jones movies, Matthew Henson and the Ice Temple of Harlem should make for [a] long-running series.” 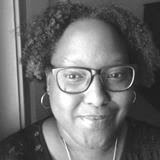 Nicole Givens Kurtz is an author, editor, and educator. She's been named as one of Book Riot's Best Black Indie SFF Writers. She's also the editor of the groundbreaking anthology, SLAY: Stories of the Vampire Noire. Her novels have been a finalist in the Dream Realm Awards, Fresh Voices, and EPPIE Awards for science fiction. She's written for White Wolf, Bram Stoker Finalist in Horror Anthology, Sycorax's Daughters, and Serial Box's The Vela: Salvation series. Nicole has over 40 short stories published as well as 11 novels and three active speculative mystery series. She's a member of Horror Writers Association, Sisters in Crime, and Science Fiction Writers of America. You can support her work via Patreon.
###
BRIAN K. MORRIS
Author: Snow Short #4 - Snow Ambition 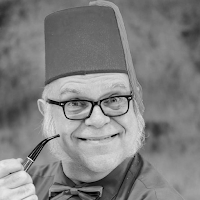 Brian K. Morris is a freelance hybrid author, an independent publisher, a Facebook Famous YouTuber, an "award-winning" playwright, and a former mortician's assistant. A professional writer for over 20 years and a full-time author for almost a decade, Brian's books have sold on three continents through his Rising Tide Publications and Freelance Words imprints.

His specialties include New Pulp, Horror, Contemporary Fantasy, Humor, and Non-Fiction with a healthy side of strong female characters. In addition to being in several anthologies from Flinch Books, NeoLeaf Press, GCD Press, Lion's Share Press, among others, Brian also maintains a broadcasting schedule on his internet broadcasts, Nevermind the Furthermore, Clever Title Pending, and Comic Book Spectrum.

An Illinois native, Brian lives in Central Indiana with his wife, no children, no pets, and too many comic books. He also wants to write more Abraham Snow adventures. 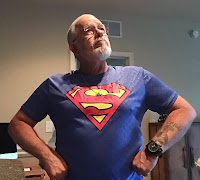 Clayton D. Murwin is a Freelance New Pulp Cover Artist/Graphic Artist/Comic book artist. He founded and was President of a 501c(3) non-profit organization in V.A. called “Heroes Fallen Studios Inc.” from 2010 -2013. Clayton is a professionally published artist with over 35 years experience. He has a degree in computer graphics and design and enjoys painting and drawing comics and graphic novels.

His first published work was for an independent publisher Red-Zone Comics, owned by Toby Swift (creator & owner) for the title “Mind Hunter Omega.” He was a co-creator, developing all of the art, pencils, inks, letters, colors, and also story editing. He penciled a 8 page story in Nathan Thomas Milliner’s Comic, “The Malevolent” Book Three. Clayton also pencils portraits of Fallen Heroes for Gold Star families, was part of the Korean War 60th Anniversary commemorative project, and served as project manager for Graphic Novels for the Department of Defense, creating two 50th Anniversary Graphic Novels titled “Korean War Volume 1” and “Korean War Volume 2,” which were published by his non-profit Heroes Fallen Studios Inc. He often donates art to charitable causes.

Clayton’s most recently published artworks can be found in “Pulp Reality” Issue #1 and “Pulp Reality” #2, published by StormGate Press, a variant cover for The League of Enchantment’s first comic "Loey The Liger,” interior illustrations for Airship 27's Productions’ “The Eyes Of Dawn” New Pulp Novel written by Brad Sinor. He recently produced cover art for Charles F. Millhouses’s “Captain Hawklin and The Ghost Army,” book 8 in the series and “Captain Hawklin and The Invisible Enemy,” book 9 in the series. He contributed interior art for “The Journal of Military Experience” volumes 2 and 3 produced, by Travis Martin that told Veteran’s Real Life Stories.

Clayton was born in Norfolk VA. and grew up in North Carolina and Florida, where he currently resides with his beautiful British wife of 21 years, Collette, who is originally from Staffordshire England UK.
###
MARK BOUSQUET
Author: Snow Short #5 - Angel in the Storm 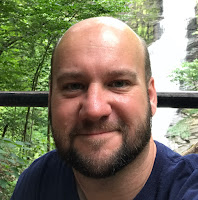 Mark Bousquet is the author of over fifteen novels for both adults and kids. He is best known as the author of the Spooky Lemon Mysteries and Gunfighter Gothic weird westerns for adults, and The Bear at the Top of the Stairs for younger readers. Other novels include The Haunting of Kraken Moor, Used to Be: The Kid Rapscallion Story, American Hercules, and Dreamer's Syndrome. His short stories have appeared in collections for a variety of publishers and he is currently working on a space opera under the banner, The Deep and Divided.

In his pay-the-bills identity, Mark is a full-time Assistant Teaching Professor in the Writing Department at Syracuse University. He also learned two Bachelors from the university, a Masters from the University of New Hampshire, and a PhD from Purdue University. His academic writing has appeared in ISLE: Interdisciplinary Studies in Literature and Environment, Food in Film, and Marvel Comics' Civil War in the Age of Terror.
###
MICHAEL GORDON
Editor 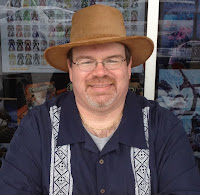 Michael Gordon is a writer, publisher, and podcaster. His creator-owned comic, Tiki Zombie, has been running for over a decade. He has also worked on various other books including The Untold Origins of Invisible Scarlet O'Neil, Crypto Zo, Strong Will (with the award-winning author Bobby Nash), and the Earth Station One: Tales of the Station anthology series.

Michael Gordon can also be heard saying, “Howdy!” on the weekly Earth Station One podcast, as well as a number of other shows, mostly on the ESO Network. 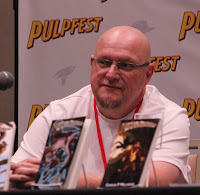 Charles F. Millhouse is Stormgate Press' Award Winning Publisher and the author of over twenty-five books in the Science Fiction/Fantasy/New Pulp genres. A storyteller/dreamer since childhood, Charles published his first book in 1999 and he hasn’t looked back. A pioneer in Independent Publishing, he patiently waited for technology to catch up with his visions and with the advent of Print on Demand and the Ebook craze, Charles created Stormgate Press in 2006 to further his publishing endeavors.

In 2012 Charles published the first of his highly successful new pulp series, Captain Hawklin and the Skyhook Pirates. He followed that up with a Supernatural Western, the New Kingdom Trilogy and finished his space adventure series, Talon’s Epic.

Connecting with readers, Charles focuses on providing highly entertaining, adventure and thought provoking stories for those people who enjoy a well-crafted prose. 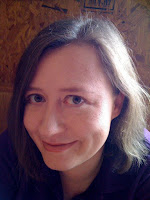 Bernadette “Berni” Johnson began her writing career at age 6 when she crayoned a book about her mom that received a rave review from its lone reader. Dabbling in programming on an Atari computer led her to an IT career in adulthood, but she never lost the writing bug and is now churning out words on the regular.

Her non-fiction works include many tech articles for HowStuffWorks.com and The Big Book of Spy Trivia from Ulysses Press. Her most recent short story (besides this one) is “Welcome to Merciful” in Castle of Horror Anthology Volume 6: Femme Fatales. She is also working on several more stories, a short horror/comedy film script, and a cozy mystery novel with Bobby Nash, who you may have heard of somewhere. :)

Berni spends her free time watching movies and TV, avoiding chores, and doing the bidding of her terrier. You can read her blog and join her mailing list at www.bernijohnson.com and read free short stories at https://vocal.media/authors/bernadette-johnson. 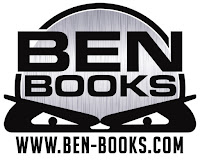