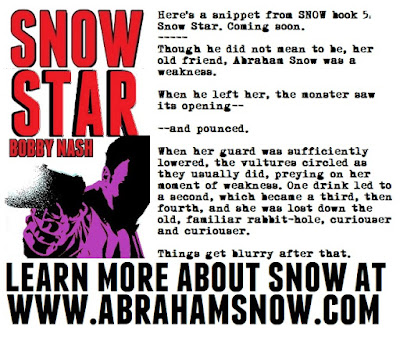 Here's a snippet from SNOW book 5: Snow Star. Coming soon.
-----
Though he did not mean to be, her old friend, Abraham Snow was a weakness.

When he left her, the monster saw its opening--

When her guard was sufficiently lowered, the vultures circled as they usually did, preying on her moment of weakness. One drink led to a second, which became a third, then fourth, and she was lost down the old, familiar rabbit-hole, curiouser and curiouser.

Things get blurry after that.

Learn more about SNOW at http://www.abrahamsnow.com
Posted by BobbyNash at 3:42 PM