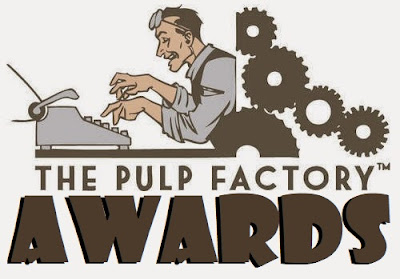 The Windy City Pulp and Paper Convention has been postponed from April until September due to Coronavirus limitations. This is the con where The Pulp Factory Awards are handed out. Instead of delaying announcement of the winners until September, The Pulp Factory's Ron Fortier released the following statement today.

PULP FACTORY AWARDS 2020
In lieu of the Windy City Pulp and Paper postponement until Sept., this year’s Pulp Factory Awards Winner will be announced via a special video and Press Release. Once the actual awards have been made and addresses for the winners obtained, regular hosts Ron Fortier and Rob Davis will do a short video announcing the winners of each of the five categories. At that same time, the actual awards will then be mailed out to each recipient. Again our thanks to Van Plexico and Gordon Dymowski for a great job handling the voting. As soon as the video is up at You Tube, we will circulate the link and Press Release everywhere on line.

I will post more details as soon as I have them.

Posted by BobbyNash at 5:59 PM